Waiting for the walk to begin (checking in on Facebook) 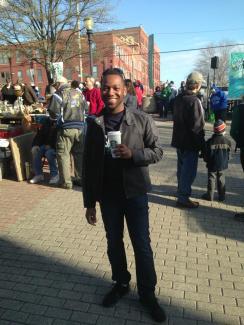 Celebrating being the top individual fundraiser with Kristin Riott, Executive Director of Bridging the Gap, and KC’s King and Queen of Green!

After years of contemplating how to commemorate Earth Day, I decided this year to actually do something. On April 1st I signed up for Earth Walk KC 2013. My initial goal was to raise $150. If fundraising didn’t go well, I would consider either donating the money myself or reducing my goal to whatever I raised. The response was so overwhelming I increased my goal to $500. Even that goal was surpassed. I cannot express how much this means to me!

So today, I walked for everyone – those who donated, those who shared or retweeted my begging for donations, and those who simply said ‘good luck’. Thanks to the support of friends and family, I was the “1st Place Individual Fundraiser” raising $680 to continue the mission of the environmental nonprofit, Bridging the Gap!

I dedicate this post to the following individuals and thank them so much for their support: